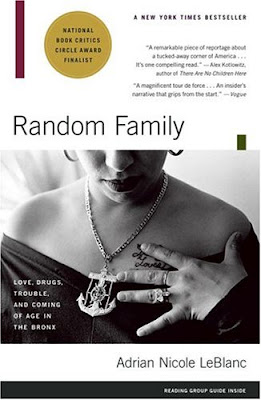 I don’t usually like being chucked into a book, and I spent the first few chapters of Random Family, Adrian Nicole LeBlanc’s ambitious, saga-esque work of non-fiction, wondering why LeBlanc hadn’t written an introduction. She doesn’t interpret; she doesn’t try to inform beyond the lives of her characters. She doesn’t examine the system directly; she doesn’t give background information about laws, or neighborhoods, or people, or policies. She just throws you right into it: the daily ups and downs of life in the Bronx for an everyday teen. The story starts with the beautiful Jessica, so young and already months away from getting pregnant with the first of five children. From there, the story skitters and jolts from character to character: the wild, drug-using Lourdes, Jessica's mother, and her crazy brother, twelve and already out on the streets, breaking night. There's no pause, no situating. The narrator is invisible, unknown.


But after a while, I started to get it. This is immersion journalism; these are LeBlanc's characters’ lives. In Random Family, the struggles of half a dozen poor New York City teenagers are chronicled with grace and honesty. These kids – adults, really, because kids in the ghetto grow up at age five – were raised by the street, and they’re rugged and clever. The men deal drugs and the women have babies. A lot of the characters, men and women both, get arrested and go to jail; they get beaten and recover. They get kicked out of their moms’ houses. Their moms become grandmothers at thirty. Their babies get molested as toddlers. The book breaks your heart, and it makes you gasp, exasperated, at all the little mistakes – mistakes the system facilitates. All the little choices that make life harder, and all the little things that compound bad choices: no time or money for birth control, quick and expensive loans, abundant cigarettes, booze, and weed - and worse. A shitty transport system means a shitty life if you don’t have a car. Cheap sugar means rotten teach by three.

I realized an introduction wouldn’t do this book justice. It wouldn’t be fair. I could come to my own conclusions: that this was the story of an America I’d never seen, where girls became moms at twelve, and three-year-olds passed around blunts and bootie danced. Men had multiple wives, and gunned each other down in the streets. This was a story about a system stacked against the people who lived there, a system designed to see them fail.

Random Family is a chaotic tumble of breakdowns and letdowns, betrayals and grief. It’s pain paired with joy: the beauty of the teenagers, their clothes and jewelry and hair and makeup, and the  beauty of the love in the ghetto: between parents and children, between lovers, between friends. People take care of each other’s kids; people share what little they have. People do their best to keep each other alive.

Halfway through Random Family, I looked up and found myself on a Southwest plane, half-full and on its way back from Atlanta. I’d been at an expensive educational conference, and I was exhausted, though I’d learned a ton: about accelerating students, interpreting data, and the obstacles young men of color face at community colleges today. I was wearing a nice outfit, and my new laptop slept in my bookbag.

I held Random Family in my hands and thought about all that I had, growing up: summer camp, a grassy yard, a dog and cat, a laundry line. A street that I could bike down. Friends I could explore the woods with. Skis and a ski pass; figure skates. Soccer balls; a tennis racket. A subscription to Highlights and a bookshelf of books, all mine. I thought about all the choices, big and small, that brought me to this moment. Some of those choices I made for myself, but most were already set for me, because of who my parents were, my grandparents. Because of the color of my skin, my class, my caste, all of my inheritances, I was one of the lucky ones, and I had had it so good. I hadn't done anything to earn that. I held LeBlanc’s Random Family in my hands, and I cried: it was so late, I was so tired, and there was just so much suffering in this world. I felt so suddenly guilty. Plus, our country is so sharply broken, and it probably won’t ever get fixed. There are so many of us who will go through our lives – on planes to conferences, in our cars to school – never knowing how bad things could be.

Dear readers, if you haven’t already, please go to the library and check out Random Family. I can assure you it will change your life. Don’t let the absence of high-level explanations dissuade you, because those don’t exist in the ghetto, and this book is true to that world. In its title and in its telling, Random Family depicts a realm just up the road, or just downstate - not far from you. Desperation lives around the corner. This is America, Random Family proclaims: severely fucked up, but wretchedly beautiful nevertheless.
Posted by Kate at 12:30 PM