How to Murder Your Life 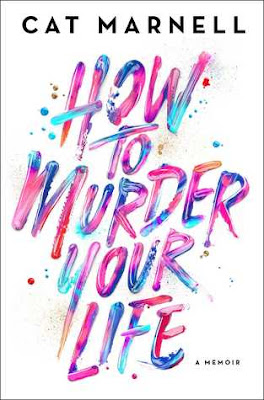 It took some wheedling, but Peg came through for me, like she always does, and HOW TO MURDER YOUR LIFE, Cat Marnell's tell-all memoir, arrived from the High Plains Library District via interlibrary loan just a week after I'd requested it. It wasn't something we'd be ordering for our own library, Peg explained. Too....something. So when the book arrived, it had that tinge of bad, of banned, and I grabbed it up and held it close. Illicit. The cover itself was a guilty pleasure, the title scrawled in pink and blue - lipstick and smeared Adderall? I took the book home to read and, for the next two days, did little other than that.

HOW TO MURDER YOUR LIFE is one addict's story of growing up rich, white, beautiful, and hungry - for drugs, for men, for experience, for food, for beauty, for love. Cat Marnell, in gossipy, inviting prose, draws us up the crystal stair of her childhood. Born and raised in a Bethesda "Shangri-La"—her words—Marnell endures her parents' constant fights and her own sweeping mood swings against a backdrop of professional landscaping and a kindly grandmother, dear Mimi, who bails out Marnell way more than once.

So I figured I'd hate it: rich bitch, catty prose, and a barrage of exclamation points. Like, every third line....! But despite the irreverent style and the decidedly "unwriterly" quality of the book, I found myself falling ever deeper into Marnell's sticky web of crushed pills, Gatorade spiked with Ketel One, and all-nighters fueled by speed, heroin, and 4 AM visits to the 7-11 for binge foods. I'll admit it: I fell for Marnell, right away and then increasingly so as this raunchy memoir progressed. Her style is so refreshing! It's so candid! The exclamation point really can serve a function! The exclamation point, in essence, is Marnell: a little showy, a little gaudy. Plus, it takes the right person to use it well - it only looks good on some people.

It looks good on Marnell, whose style seems to edit as it goes, reflecting the many layers of revisions that went into this book. This narrator is constantly referencing editorial desicions - for example, in comparing her first boarding school to a "concentration camp," she admits that she put the phrase in and took it out literally fifteen times. "Let its presence here," she writes, "be a harbinger of bad judgement to come."

And come bad judgement does: in the form of a late-term abortion, a series of failed relationships, a best friend who sucks blood from the character's nose after a night of too much coke, a series of babydoll dresses and an infatuation with Courteney Love, a string of champagne-filled events in which our narrator gets obliterated, a second abortion, many falls and accidents, several assaults, several robberies, and several rapes. At times, I couldn't go on, but go on I did, barreling through Marnell's raucous, battered, wired life like an addict myself. 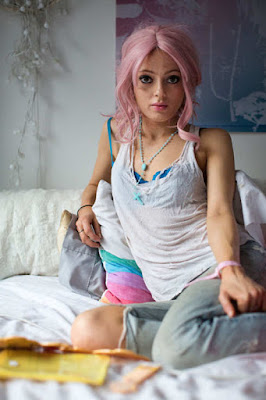 In the end, I'd fallen into twisted love with Cat Marnell. This wasn't the healthiest relationship, and her final lines left me unsettled, disgusted, and weirdly smitten. In her Afterword, which serves primarily as a way to report on all the book's characters - most of whom Marnell cares about far more than you or I - she writes:

Yes, my addiction is still very much part of my life—distracting me with cravings, obsessive thoughts, and negative self-talk. Yes, I see my Chinese night pharmacist more often than I see my pregnant sister. Yes, I was recently 'caught' doctor shopping on the Bowery...I'm keeping my disease active as long as I'm not in recovery. By keeping away from AA or NA, I remain in the danger zone. Things could—and probably will—get bad again. Real talk!

Recovering addicts, current addicts, would-be addicts, new mothers, old mothers, grandmothers, my mother, and Peg: I can imagine all rejecting this book. Maybe it starts with discovering it somewhere it shouldn't be, like in a teenager's bedroom. Maybe it escalates to reading, just out of curiosity, a few paragraphs, but then burning it, destroying it, disappearing any evidence of what many readers will call filth. Being sick and hating herself made Cat Marnell famous, and in many ways, her book advocates drug use. "I may be back on speed," she writes at the book's close, "but I take way less than I used to." In 2017, Marnell is wealthy, well-dressed, well-groomed, and comfortable. "Runner's high is so crazy!" she writes of her new fitness routine, Barry's Bootcamp in Noho. "Especially when you boost that shit with a little nibble of Adderall just before you hit the treadmill."

Hate Marnell if you want. She's expecting you to. The whole story, after all, is about keeping an addiction alive, sabotaging your goals and dreams, and still winning in the end. Still, Marnell isn't without a conscience. In HOW TO MURDER YOUR LIFE's final pages, she writes:

So what can all you pretty young addicts learn from this? Beware. Unealthy people attract other unhealthy people—and girls on drugs attract bad guys like a wounded baby deer attracts vultures. When you're high every day, you are vulnerable every day. You are making your jugement all screwy. You will let bad people into your life.

Of her life now, Marnell writes, "I've got a hot career, a clear head, and in ice pick in my kitchen in case I need to Basic Instinct a bitch."

Not quite sober, not quite free, but five stars for courage to Cat Marnell.

I've never quite heard it told like that before.
Posted by Kate at 8:21 AM