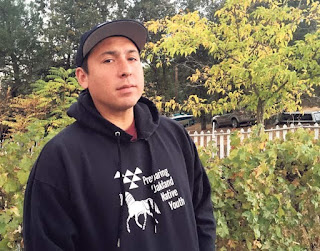 When I Googled Tommy Orange, I found photos of a guy around my age. He’s wearing a baseball cap and a black sweatshirt, and he’s unsmiling, staring straight into the camera. Sherman Alexie comes up on the same Google search, and Louise Erdrich, and Joy Harjo – the handful of Native voices our nation’s publishers have chosen to elevate. Scroll farther down the Google Image results, and photos of Tommy Orange disappear. Now, the feed fills with pictures of white guys in puffy orange vests, pictures of orange sweatshirts that say “Tommy Jeans,” even a picture of a fuzzy felt orange fruit, complete with a felt leaf hat. Tommy Orange is new to the scene, and his Google results prove it.

Still, his is the new voice of an old soul, the voice of someone who’s bound to stick around, make a splash, put new ideas about what it means to be Native into our collective head. His can be a weary voice, or a joking voice, or a voice imbued with an unnamable grief. It’s a voice saturated in new turns of phrase, a voice simultaneously youthful and wise. THERE THERE tells the story of urban Natives, and the prologue begins with a reflection on a bloodied past—“They did more than kill us. They tore us up.” Orange remarks that “getting us to the cities was supposed to be the final, necessary step in our assimilation, absorption, erasure.” But “we did not move to cities to die,” he explains. Instead, “the city made us new, and we made it ours.” For anyone still imagining each Native with a wolf at his shoulder and a feather in his hair, THERE THERE will upend that perception – one that’s sometimes true, but increasingly not. 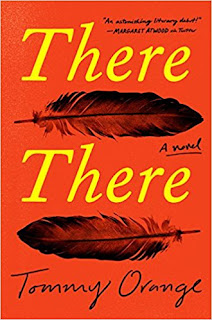 In the city, Orange’s characters reinvent what it means to be of the earth. The city became home, because “the city sounds like a war, and you can’t leave a war once you’ve been.” In the city, “Everything here is formed in relation to every other living and nonliving thing from the earth...Buildings, freeways, cars—are these not of the earth? Were they shipped from Mars, or the moon?” In Orange’s world, “Urban Indians feel at home walking in the shadow of a downtown building.” The city’s become home, where “the land is everywhere or nowhere.”

THERE THERE tells the stories of twelve different Natives, roaming the West Coast as they make their plodding way towards a long-awaited Oakland, California powwow. Some are going to make money; others to perform, to dance, to don the regalia that’s been gathering dust in their closets. Some are going to find the parents who long ago left them behind, and who now are feeling sorry, feeling guilty. As the story progresses, the connections between each of the twelve characters reveal themselves; they are interconnected, and their journeys have crosses many times, without their even knowing.

In one of the book’s final chapters, Tony Loneman, one of the twelve, puts on his regalia, then takes a train to the powwow. “No one on the train knows about the powwow,” Orange writes. “Tony’s just an Indian dressed like an Indian on the train for no apparent reason. But people love to see the pretty history. Tony’s regalia is blue, red, orange, yellow, and black. The colors of a fire at night. Another image people love to think about. Indians around a fire. But this isn’t that. Tony is the fire and the dance and the night.” An older white woman asks Tony about his regalia, but when he invites her to the powwow, she demurs. “People don’t want any more than a little story they can bring back home with them…to talk about how they saw a real Native American boy on a train, that they still exist.”

THERE THERE is often searing, frequently beautiful, and ultimately tragic. That’s how so many Native lives look today: Conflicted, complex, and sometimes brimming over with love. There’s a grief beneath the surface, and there’s hope. There’s fear, doubt, and shame. There’s an unnamable legacy, ugly and beautiful both. To be a Native today means so many things, so many different things: It means to be alive, to smell the air, to put both feet on the ground and keep moving.
Posted by Kate at 6:43 AM