Henry warned us that finding the base of el baúl, the mountain, would be difficult, but this is impossible. So far we’ve walked up Calle 4 twice, Calle 5 three times, Diagonal 1 twice, and way too far down Diagonal 3. We’ve asked directions several times, but each time we just get confirmations that yes, the mountain is right there—they point to the mountain, now visible, and nod—that’s what we should walk up. A man at his tienda, a woman with her child, a boy walking his bicycle; all have told us this. Our Spanish is horrible, Kendra moans as we reach, once again, the familiar junction, the incorrect junction, the one we’ve stood at already twice before.

The sun just keeps getting hotter; I’ve never seen a place with such a range of temperatures in a 24-hour span. The nights are nearly freezing; we put on all the layers we have. Yet we’re peeling off clothes now; Kendra’s down to her t-shirt and skirt and sandals, and I’ve rolled up the sleeves of my thermal. We both wear sunglasses; I wish I brought sunblock. I can see that my hands and forearms are growing pink. I try not to think about that. Instead, I make an executive decision; if that is the mountain, and this road leads towards it, then let’s take this road. And I start walking. Kendra’s not going to stand at this corner alone, so after a moment, she follows. The road turns from pavement to sand.

We remember that the map described a steep hill we should walk up, to get to the trailhead. We pass a woman with a huge basket of flowers on her head; a man and woman walking with their young son between them; a mangy dog. The road grows quieter and quieter and then suddenly we’re out of the city, surrounded by fields, ascending a hill dotted with houses and crowing with roosters, lowing with cows. The road gets more and more narrow; the sun gets hotter and hotter. Neither of us feel that this is the correct way, and neither of us says it out loud. In any case, I think to myself, we’re climbing some mountain, maybe not the right one, but something, because we’re definitely going up, and there, now I can see the summit, up there in the distance. The road is getting steeper just like the map said, so maybe there is hope, and at least we’re out of Xela, which on warm afternoons like these grows stuffy, sticky, and grime coats our bodies. Here, at least, the air is clean, the breeze cool. 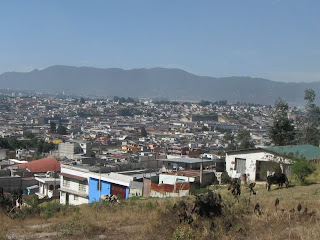 Now the road thins into a trail, a herd-path, and I do not say to Kendra that this just can’t be the main path up el baúl. The site is too popular for such a narrow path. But we just keep walking, because even though we have our doubts, we like this silence, a silence interrupted only by the meow of that gray cat perched on a rock, watching us and looking a little like a ghost-cat, because it’s so thin and gray and has such big, pale eyes. There’s the sound of grass crackling in the distance where someone is walking with their cow, and sometimes when we pass houses, we set dogs barking. There is the splash of water behind someone’s sheet-metal gate. An older woman peeks over it to watch us pass; I raise my arm to her. Buenos tardes, I say to her, and she grins wide, showing off her one gold tooth. Buenos tardes, she calls out, and sets the dogs barking all over again.

Now we come to a fork in the trail. We have two options. I hesitate, then lead Kendra to the left, up the path that looks slightly more trodden. She doesn’t go first because the barking dogs in the house next to the trail scare her a little, but they don’t scare me, because there, look now, they scoot under the metal gate to bark and bark, but when we get close they just scoot right back in. They’re more afraid of us than we are of them, I tell myself. We walk past the house, the last house on the hill it looks like, past the metal gate and then the porch, which is littered with old chairs and an old, dusty car and some old plywood boards. An old hammock. Everything is the same color, because of the fine layer of dust sifted over it.

But as we pass the porch and start up the narrow trail, which grows even steeper and disappears into berry bushes, we hear the voice of a woman behind us. We turn. She’s standing at the gate with her hands on her hips and her gray-streaked hair pulled back behind her head in a knot. No camino, she repeats a little louder. We turn around and walk back down to her, and she gestures towards the other path, curving her hand to show us that we must walk around the house and upwards. We thank her, keep walking, and when I turn to see whether she’s still watching, I hear the metal gate bang and she is gone.

The trail just gets steeper and steeper, and I can feel sweat bead at my temples. I try not to worry that we’re running out of water. We walk past cornfields that have been planted in small flat places between valleys. We walk under stands of tall piñón trees, which cool the air and so for which we are grateful. We don’t know where we are, but that woman back there did say this was the path, the path to somewhere, and so I allow myself to be reassured, by what that woman said and also by the nice smell of piñón in the air, and the way the sun falls in patches on the ground, and the way that man in the distance raises his arm to wave at us as we walk past where he is herding his animals. 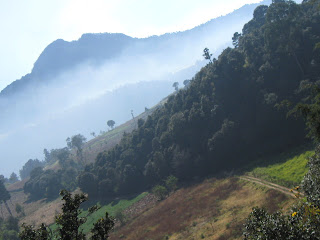 And then, all of a sudden, there is trash on the ground, styrafoam platters wrapped around the thick bushes, and that reassures me too, because it must mean that we are near the toll road, the toll road the map described, the one that, clearly, we weren’t able to find. And sure enough, we climb up a little more and all of a sudden we’re on the road, a paved road that, sure enough, is going up, curving at a slow incline but ascending nevertheless. Kendra and I grin at each other. The pavement feels so easy to walk on, after that thick brushy trail. Looking down into the valley, we can see dirt roads, more patches of cornfield, and in the distance there is fog between the mountains. Farther off there is a city, a dry city built on a floodplain, the land all around it arid and yellow, so different than the lush green of the trees in the hills, the moist white fog. 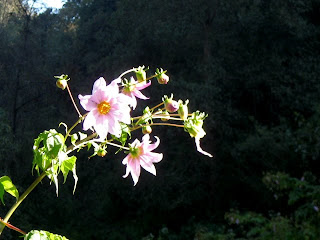 Eventually we hear the sound of sticks breaking above us. Maybe it’s a squirrel, we guess. Maybe it’s a monkey. But as we get closer we see that it’s a man, a man who has managed to climb thirty feet up and is breaking the branches off an old piñón and tossing them to the ground. Buenos tardes, we call up. Buenos tardes, he says, looking down. The branches land with a dry clatter on the pavement. We walk a little more, through a gate where an official-looking man with a big gun waves us past, and then we break out onto the summit, where most people have driven up in carloads and are gathered at picnic tables, or around the metal slides that people ride down on sheets of cardboard. We walk past the big monument with the Mayan script, past the grills and the baños until we reach the big yellow gazebo that overlooks the big cross and, beyond that, the three cities, Xela and the towns that border it. Houses sprawl below us, and then the mountains rise up, suddenly, like a wall that divides one plain from another. We can see everything from here, we think to ourselves, and we forget the sweaty walk, the group of Guatemalan boys beside us that are eating meat from styrafoam containers and watching us. We see only the view, the magic fog in the distant hills, and we can feel the reward of this wind, which cools the hot air and slows our hearts. 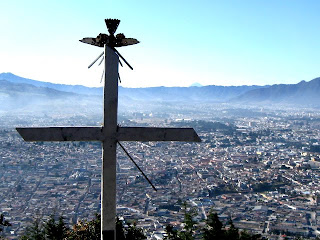 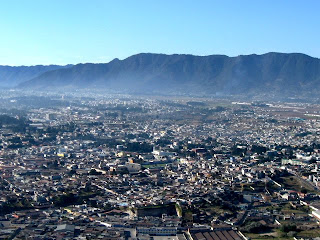 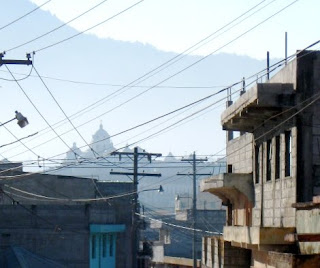