One huge step forward, everyone!

Here's to our country, for finally making gay marriage legitimate. It's surreal on many counts, especially as I learn the news through my laptop in a remote adobe house on the New Mexican plains.

Beneath the Gay Marriage Triumph article, the Times showed a Tweet roll. One Tweet said, "I'm proud to be an American."

And that was a terrible thought, I know, I know.

Except that this decision is being made far too late, later than it should have, and this issue is in fact, in five out of nine very important minds, a no-brainer.

OK, maybe not a no-brainer. Much careful thought and all of that. But still. I suspect, deep down, it was a no-brainer.

Meanwhile, decades have dragged along. Gay couples across our bountiful nation have, for far too long already, endured lifetimes without rights or recognition. We're late in the game. The issue of gay marriage has been covered in the media to an extreme degree, drawing our nation's attention away from other critical national and international issues. In short, we have wasted so much time. This should have been decided long ago.

Are those the wrong things to think? Should I simply be jubilantly happy? Should I be weeping tears of joy, and not of frustration? Should I be seeing this as a global triumph and not a national one, not as closely tied as I might think to my identity as an American? Should I keep in mind that the whole world, besides dear Holland (and even that only happened in 2000!??), is late in the game?

I remember a day years ago when my friend Sam and I stumbled accidentally into Buenos Aires' pride celebration. Gay marriage had been legal for about a year in Argentina, and this was a wild fiesta: funky, rootsy, and wholly organic. We drank beer and shouted and cried. We made friends. We didn't just watch the parade, we WERE the parade, just the two of us plus about a million giddy Argentines, marching down the Avenida de Mayo towards Congreso.

May America know such bliss, if it doesn't already.

Hooray for the gays! 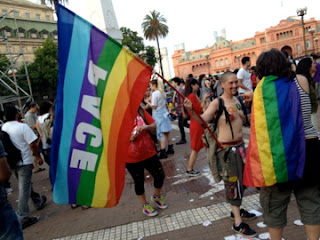 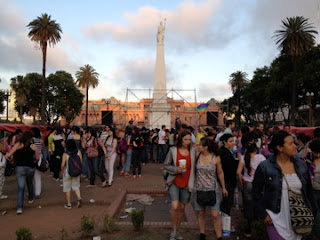 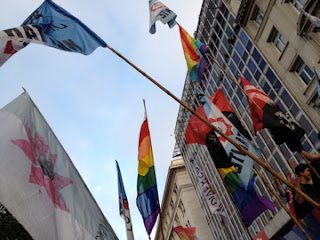 Email ThisBlogThis!Share to TwitterShare to FacebookShare to Pinterest
Labels: queers